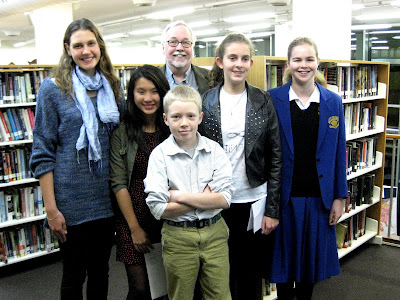 Every year for the past few years I’ve been involved in judging the Bill Coppell Young Writers’ Awards run by the Stanton Library in North Sydney. I have a great affection for this library as it was the first library my family and I used when we moved to Australia many years ago. I spent many happy hours there---some of them spent researching my first book---so it’s always good to be invited back. And one of my sons now works there.

This year there were five of us judges, each judging stories and poems from a different age range. Mine were the works of eleven and twelve year olds and I was hugely impressed by the kids’ writing. As always, it was hard to pick the winner, the Highly Commended, the Commended and to award various merit certificates. Pictured above are the winners of the top awards in each of the age categories. From left to right: Becky Bunting, Elizabeth Lim, Niall Gifford, Madeleine Zurowski and Phoebe Cook. (I’m the old guy at the back.)
Posted by Duncan Ball 1 comment:

A Week of Crow Dancing

It’s not by accident that someone thought up the name Woop Woop for an imaginary place somewhere in the Australian outback. Australia has a number of real double-barrelled place names such as Yarra Yarra, Gool Gool, Mooney Mooney, Kurri Kurri, Gumly Gumly, Book Book and many more but Wagga Wagga must be the best-known of all of them. I just spent a week visiting schools in and around Wagga Wagga. Wagga, as everyone calls it, is a country town which declared itself a “city” in 1946. It’s a mystery why a lovely town would want to associate itself with the crime, grime and ugly tall buildings of a city. I can only guess that someone had just visited New York, New York, and thought they’d get in on a good thing.

After exhaustive research I found that the word “wagga” means “crow” in local Wiradjuri Aboriginal language. Said twice it means a lot of them. So before the place was a town and then a city there must have been lots of crows in the trees around the Murrumbidgee River that flows through it. But further pains-taking research (isn’t Google fun?) revealed something else. “Waggawagga” may actually have come from the word to dance or “to reel like a drunken man”, possibly a description of the local indigenous dance. Either way, Wagga Wagga could do well to adopt the New York, NY, slogan: “a name so nice, you’ve just gotta say it twice.”

While I was in Wagga there was a move afoot to start a Dame Edna Everage Museum devoted to the “housewife gigastar’s” memorabilia. According to her creator, Barry Humphries, Dame Edna was born Edna May Beazley in Wagga Wagga. Would such a museum attract hordes of Dame Edna frock-watchers to Wagga? Or would Wagga be the butt of Dame Edna’s humour along with her long-time Melbourne suburb, Moonee Ponds? 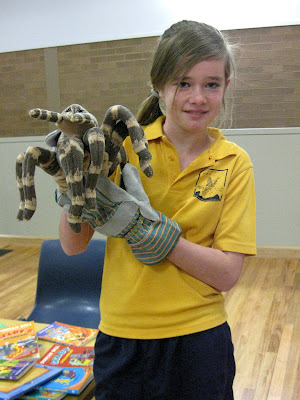 During a very cold week, I couldn’t have been more warmly welcomed by the kids. I read my stories and talked about my writing. In some of my sessions I brought out “Amy” the Amazon Twitching Spider (see the story “Selby Spiderdog” in the book Selby Splits). Amy usually delights my audiences but, very occasionally, she frightens someone. It’s a natural reaction to a big hairy spider even if you’re not an arachnophobe.

In Temora, Amy terrified little Elizabeth (pictured). Fortunately, Elizabeth plucked up her courage and before long she was handling the spider like a seasoned spider-wrangler.
Posted by Duncan Ball 1 comment: