The Perils of Prince Percy of Pomegranate 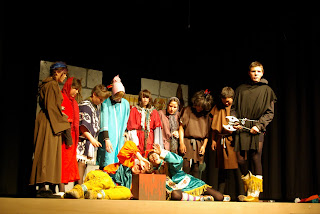 There wouldn’t be many Australian writers who have had one of their plays performed in Cree. This has recently happened to me so I’m feeling very special at the moment. Cree is the language of many of the indigenous peoples of northern Canada and a group of kids in northern Saskatchewan recently performed a play of mine, “The Perils of Prince Percy of Pomegranate”. Admittedly the play remained mainly in English but it was re-written to incorporate a lot of their cultural language as well. And this is how it came about:
Some years ago I wrote a book of plays called Comedies for Kids. Some copies of the book were distributed in various countries, including Canada. Since then I’ve occasionally had requests from teachers for permission to perform some of the plays. 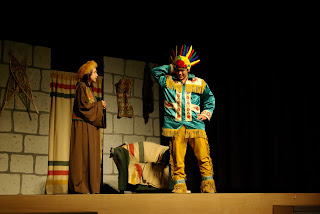 In my September 2009 “Duncan’s Diary” entry on my website I wrote about a wonderful drama teacher in Canada, Lana Patterson, working with indigenous kids in Saskatchewan. The kids had put on a play, “Murder at Muck-up Mansion”, from my Comedies for Kids. Thanks to her work and all the wonderful actors it was a huge success. The production won many awards at regional level which qualified them to compete at the provincial level where they came home with their first provincial trophy!
And this year it’s happened again! Lana re-worked another of the plays from my Comedies for Kids, “The Perils of Prince Percy of Pomegranate”. She added the Cree words and renamed it “The Perils of Chief Cimagasiw of Ciciganihk”, and the kids once again won many awards both in their region and in the Saskatchewan provincial awards. Well done, Lana! Well done, kids! 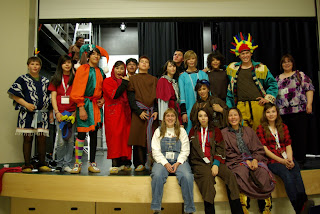 This book of plays is now out of print now so I’m continually surprised when I hear that the plays are still being performed. There must be some very tattered copies out there. And “The Perils of Prince Percy of Pomegranate” seems to be the most popular play in the book, perhaps because it’s got such a large cast so it's good for school groups. In my “Duncan’s Diary” entry for March 2010 I reported on a production of the same play by kids at Golden Grove Primary School in South Australia. 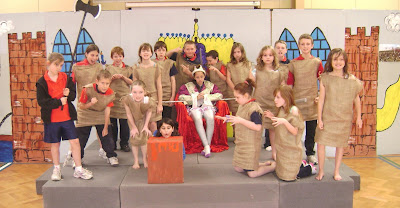