Do you have a refuge, a quiet place you’d retreat to if you suddenly had an important project and wanted to avoid life’s daily distractions? I don’t mean an upstairs bedroom or a friend’s granny flat but a totally different hidey-hole, in a different country. I have a few possibilities.

In my fantasy inspiration would strike and I’d come up with a cracker idea for a novel, an idea so good that I’d auction the publication rights and pocket a huge advance. Now all I need to do is write the book away from harassing phone calls from Steven Spielberg and Peter Jackson who would be after the film rights. Where would I go? High up on my list of hideaways is my own Spanish Shangri-la: Arnedillo.


Arnedillo (arnay-DEE-yo), population 477, is nestled in a valley high up in the mountains of La Rioja in northern Spain. Arnedillo is dry, bitter cold in winter and very much off the beaten path. And it’s picturesque. Why work in an ugly and depressing place? The town doesn’t have the sort of UNESCO-listed historical attractions that would draw mobs of international tourists so it’s a quiet place. It’s also crime-free (according to the locals) and it’s a long way from a beach. In short, the perfect place to settle down for a few months to work. 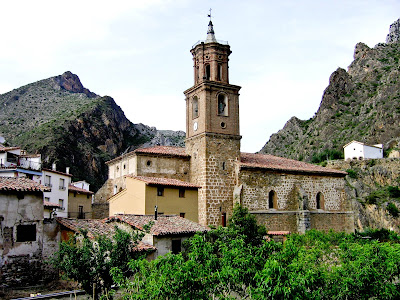 Spanish tourists do go there but these are Spanish tourists, mainly from nearby Logroño. The shops aren’t filled with souvenirs: no “Arnedillo a Noche” postcards, Chinese-made castanets or even miniature bagpipes with “Requerdos de Arnedillo” printed on them. (Forget the flamenco---this is flute, drum and bagpipe country.)


In addition to being a beautiful town, Arnedillo is steeped in history. The Romans were there when Spain was a part of the Roman Empire and since then the Vandals, Visigoths and Moors came and went. There are a few remnants of these conquering peoples but it was in the High Middle Ages that the town took the shape it has today. The town is protected by heritage orders and the valley itself has been declared a Biosphere Reserve by UNESCO.


Okay so while I want to get away from major distractions I will need a few things to do to break up the boredom of writing. I like to walk and there are some lovely walks along the valley and up into the surrounding hills. There’s a tiny bit left of a ruined 10th century castle and there are three hermitages up above the town that can only be accessed on foot. These date from the 10th to the 16th centuries and now look more like miniature churches than the hovels or caves the hermits would have lived in. No skinny bearded men raging against the evils of the world.


A bit of bird watching helps to break up the writing routine and Arnedillo has a colony of Griffon vultures that nest in a rocky crag above the town. The population of Griffon vultures in Europe had been diminishing but has come back thanks to public awareness interest. There was a bit of a hiccup a few years ago when the European Commission banned the leaving of carcasses out for the vultures because of the danger of spreading of BCE (Mad Cow Disease) but their numbers are growing again. These are magnificent birds.


Still struggling with Chapter One and out of ideas I need another break. I think I’ll take a walk up to the town’s nevero artificial. No, I’d never heard of one either but some friendly people took me to see this one and explained its use. A “snow well” is the best translation I’ve found. It’s a stone-lined hole in the ground that neveros filled with snow in the winter. In summer the compressed snow and ice could be taken out though a bottom entrance---a source of ice all summer long. These apparently were common in Europe and the Middle East from at least 2000 BC. Where I grew up in New England, USA, you just waited for a lake or pond to freeze, sawed it into blocks and packed it in sawdust in a shed. Needless to say, industrial ice-making factories in the 19th century and, later, fridges put the neveros out of a job just as happened with the ice-harvesters of New England.

There’s another walk to see dinosaur footprints but I’ll save this one for when I’m really stuck.


There are a couple of churches in town, both unlocked and generally people-free when there are no services. The grander of the two is the 16th century Iglesia de San Servando y San Germán. This is just across a tiny square from the entrance to the lovely little boutique hotel where I’ve stayed and would stay again while I work on the novel. This is the Hospedería LasPedrolas.

Arnedillo does have three festivals dotted around the calendar and their own peculiar customs to celebrate them. One of them, in November, is la fiesta de San Andrés in which the streets are filled with smoke of burning rosemary and he (or she) who breathes is will be immune from sickness such as colds or the flu all winter.

It is also a gathering place in autumn for mycologists. One of the restaurants, Casa Cañas, hosts the annual Jornadas Micológicas de Arnedillo. For mushroom and funghi aficionados there are lectures, guided mushroom collecting walks and the restaurant serves mushroom degustaciones for those mycologists who have a gastronomic as well as scientific interest in their subject.


Arnedillo’s main attraction is its hot springs. At one side of the normally-icy Cidacos River, which skirts the town, water comes out of the ground at 52.5 degrees Celsius. The town has built a series of pools, one flowing into the next. By the time the water reaches the lowest pool it’s not too hot to get into so the usual procedure is to work your way up from the warm pool to the almost-painfully-hot one. Once in the hottest pool it’s very hard to move a muscle, even to get out, but somehow you feel good afterwards. There is a big hotel and spa on the outskirts of town with mud baths for those who believe in the medicinal benefits of the water and have a bit of loose change.


Anyway, Arnedillo would be one of my perfect retreats: good restaurants, good accommodation and just enough to do to kill the boredom but not enough to not so much that I couldn’t get my work done. At least that’s my fantasy.
I didn’t just happen upon Arnedillo by taking a wrong turn between Barcelona and Bilbao.

Many years ago as a teenager living in Madrid, a young woman came to work for for my family. Charo---diminutive of “Rosario”---was not only an excellent cook and tireless house-keeper but she soon became a well-loved member of the family. Much of what we learned of the Spanish language and Spanish customs we owed to her.


Charo had grown up in Arnedillo and moved to Madrid to work. We lost track of her for years after we left Spain but eventually found her living in Logroño in the Rioja region. She'd lived in England, been married and been widowed. To make the story short, I met up with her a couple of times on trips from Australia to Spain. She was still the lovely, intelligent woman I’d known all those years ago and the two of us were as close as ever.


Later, Charo's sister, Juli, contacted me to say that Charo had had a stoke and that she was looking after her back in their pueblo, Arnedillo. We visited her there a couple of times. Charo has since passed away but Jill and I have now been adopted by Juli, her husband, Roberto, and all their relatives and friends. Spaniards being the social animals that they are, on our last visit we were almost killed with kindness.


At this point I'm having second thoughts about whether Arnedillo really would be the ideal hideaway. Maybe I'd better start thinking about hideaway No. 2 before inspiration strikes. But more on that at another time.