Newtown, in Sydney, has to be the capital of Australian street art. Or maybe I just notice it more because Newtown is close to where I live and I spent a lot of time there. And for good reason: it has a vibrant cafe and street-culture so it's a good place to go walking. And back streets and lane ways are where where the street art action is.

I'm a late convert to the world of street art I think because it comes from dark places that I'm only dimly aware of: the culture of action graphic novels ("comic books" if you're over forty) and the internet blog-playgrounds of budding teenage fantasy artists.

Most of the images are lost on me but I guess it's the same with a lot of art. I'm for look and like---or not like. Life's too short to try to psycho-analyse artists.

Still, you have to be impressed by some of the techniques. Of course they're not all Renaissance frescoes.

I do tend to like the spare images that don't cover everything and scream at you and which sometimes make use of a natural feature such as a crack in a wall or a window or a drainpipe.

I'm not as fond of walls with a name or word emblazoned on it in gigantic, shaded saw-tooth letters, no matter how expertly they're been painted even if I can make out what they say. They're just super-size tagging.

I live in a house that has a big side wall on the street, ideally suited for street art, but I admit that I try to keep it just the way it is. When it does get tagged---and it does-- I'm out there quick-smart with a bucket of paint to paint it out.

The City of Sydney has an Aerosol Art and Graffiti Policy and crews that paint out unwanted graffiti. They must have a lot of paint on hand because they're pretty good at matching any wall colour. They do try to determine whether what they're about to paint over qualified as artwork so the "best" works remain for us lane-crawler street art voyeurs.

Some of these artworks are commissioned and done with the permission of the owners of the walls but others just magically appear. Garage roller doors are favourite places for the latter.


Stencils are good for commando raids but they're not all as clever as Banksy. 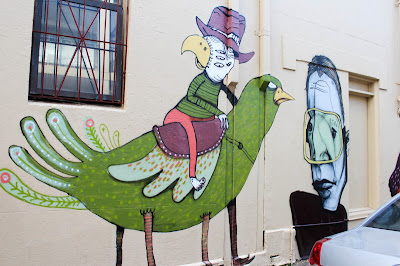 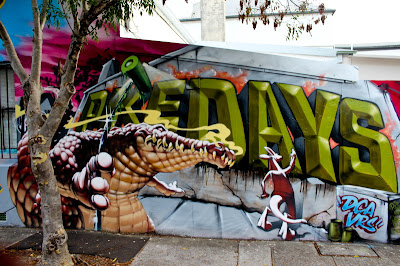 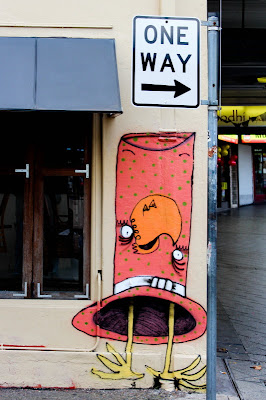 Durian, the king of fruit?

Everyone should try durian---once. I've now had it five times: twice as the fruit itself, once in durian flavoured ice cream, once in durian cream puffs and, recently in Bali, as a durian milk shake.

The first time was as durian ice cream at a Thai restaurant in Sydney and it was...well...okay. Actually, not bad. The ice cream part was good anyway. The next time was as the fruit itself when I was staying in Singapore. I was still neutral after this although I had to deal with embarrassing durian burps for the next 24 hours. Since then I've had durian a few more times and each time it gets more and more revolting.


Can anyone seriously claim to enjoy it?


I've struggled to imagine why any sane person (and sane may be the key) could possibly call it "the king of fruits", as some people do. Durian defenders will admit that the smell is appalling. Hotel lobbies in South East Asia have signs prohibiting guests to bring it into the hotel. One whiff and the other guests would stampede for the exits.

A Singaporean friend described it to me this way: "It's like sitting on the toilet and eating custard." Now if we change the word "custard" to...no, let's not.

Not only are there durian aficionados on the loose out there but some people will pay top dollar for it. When we were in Penang, Malaysia, last year there was a durian festival in the local sports ground. I wanted to go just ask a few people what the stink (so to speak) was about but Jill thought better of it and we visited a butterfly farm and later had our feet nibbled by little fish.

The famous naturalist Alfred Russel Wallace, while collecting flora and fauna in Borneo in 1856, wrote this about durian :

The five cells are silky-white within, and are filled with a mass of firm, cream-coloured pulp, containing about three seeds each. This pulp is the edible part, and its consistence and flavour are indescribable. A rich custard highly flavoured with almonds gives the best general idea of it, but there are occasional wafts of flavour that call to mind cream-cheese, onion-sauce, sherry-wine, and other incongruous dishes. Then there is a rich glutinous smoothness in the pulp which nothing else possesses, but which adds to its delicacy. It is neither acid nor sweet nor juicy; yet it wants neither of these qualities, for it is in itself perfect. It produces no nausea or other bad effect, and the more you eat of it the less you feel inclined to stop. In fact, to eat Durians is a new sensation worth a voyage to the East to experience. ... as producing a food of the most exquisite flavour it is unsurpassed.


I'm a fan of Alfred Russel Wallace. He was, after all, the discoverer of the Theory of Evolution by Natural Selection. We would all have studied him at school but for the fact that Charles Darwin intercepted Wallace's manuscript and held up its publication so he could dash off his own tome and get it published first. Wallace could have been rich and famous, been alternately worshipped and reviled, and maybe even lived to see his book banned by educators in Tennessee.

But describing durian's "exquisite flavour" as "highly flavoured with almonds" and "wafts of flavour that call to mind cream-cheese, onion-sauce, sherry-wine" sounds like he's writing tasting notes for a new release sauvignon blanc rather than something scooped out of a blocked drain. I can only think that he'd spent too long in the tropics or that he was so sick of nasi goreng that even durian tasted good. But I like to think he just had a wonderfully ironic sense of humour or that he was trying to tempt Charles Darwin to overdose on durian in punishment for his treatment.

Can anyone tell me how I've gone wrong? Should I have put sugar on it? Sauteed it with monkey brains? Maybe a fortnight-long fast would have changed my opinion of it. Anyway, leave me a comment if you think I've missed the durian boat.

I've made a "HONK IF YOU LIKE DURIAN" bumper sticker and am about to drive through Sydney just to see if I get a response. I suspect it'll be an unusually quiet drive.

Now mangosteens are another matter. They really are the king of fruit.