The idea sounds less than appetising: feed ripe coffee beans to a civet cat, collect what comes out the other end and make coffee from it. If you did this you'd be producing the most expensive coffee in the world, kopi luwak. It is expensive for good reason: it's rare and it's delicious. Having had a cup of it recently in Bali, I'm a convert. It was strong and very, well (try not to think too much about it) very smooth.

Civet cats are not cats but species of mammals that live in rainforests in Africa and Asia. The coffee-makers of Indonesia are Asian palm civets. They eat the coffee berries and, somehow, the defecant, when later washed, dried and roasted has changed. Coffeeologists disagree on the reason for this. It could be the action of enzymes in the civet's gut that changes the coffee or maybe civets are just very selective about the coffee berries they eat.

Sometime in the 17th Century some intrepid soul, walking through a forest in Indonesia where there were coffee bushes, and dying for his morning cup of java (actually it would have been in Sumatra, which is where the Dutch introduced arabica coffee from Yemen) must have spotted some civet droppings and thought (you coffeeholics will relate to this) what the hell, any port in a storm, and picked it up. The rest is coffee history.

We'd heard about kopi luwak but never tried it till we were touring an agritourism venue near Ubud in Bali. Our guide showed us various plants and trees that produce some of Bali's produce---jackfruit, longans, anise, lemon grass etc---and there, in some cages were civets. We were given cups of various teas, coffees and other herbal drinks. For kopi luwak there was a charge but at only $ 5 per cup this was a bargain we couldn't refuse.

The coffee was brewed in what looked like chemistry equipment from Marie Curie's laboratory. I'm only sorry I didn't get a better photo before the water boiled over into the gummy mess that was to be our coffee. We drank it black with a bit of cane sugar. It may have been crap but it was very tasty.

Heads of state give each other valuable gifts on state visits. On his last visit to Indonesia, Barack Obama was given a sizeable quantity of this coffee. If it was a ploy to get him to come back, it worked: he'll be at the APEC conference in Bali in October, undoubtedly holding out for a bottomless cup of kopi luwak.

We have qualms about coffee. While our Balinese driver said that the world demand for the coffee had been a boon to civets because they had been endangered and now there are lots of them, the idea of consuming a product from an animal that's kept in a small cage is not for us. "Wild" civet coffee is commercially available at an even huger price and there is a movement to apply ethical standards to the trade but if it's hard to sort out which locally produced hen's eggs here in Australia are produced in humane conditions it will be even more difficult to do the same with kopi luwak from Bali or Sumatra. So, for the time being, we'll stick to
Fair Trade coffee that, we hope, hasn't spent any time in the gut of another animal. (Don't believe the rumours about Monsanto's civet breeding program.)

There are other coffees yet to try. One is monkey parchment coffee what is chewed and then spat out by rhesus monkeys in India. We might give that one a miss. 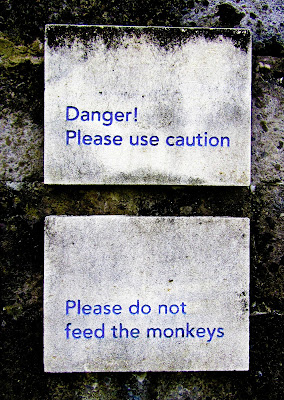