It was a brilliant idea: the lakes and rivers in Northeastern USA freeze solid in winter so why not chop the ice into blocks in winter and sell it around the world all year long? There were of course logistical problems like how to keep it from melting. And there was the question about who would want to buy ice and why? Did the world need refrigeration? Fish and meats had been salted and/or dried forever, people in the tropics didn't have a taste for dairy products and everyone was happy with the state of things. Frederick "Ice King" Tudor, an enterprising Bostonian was determined to change all that (and make a killing out of it in the process) when he started harvesting ice and selling it in 1806.
Tudor built ice houses where the blocks could be stored in straw or sawdust and could last all summer. In fact it could be packed in straw and shipped as far away as India and China. Enough ice was left by the time the ship arrived at its destination to make the trip worthwhile. In 1839 ice shipments from New England, USA, to Sydney, Australia began although on an irregular basis.

Initially, the ice was used by commercial fishermen so that people could buy fresh unsalted fish when the fleet returned. And ice was also loaded as ballast for cargo ships going to the Caribbean to pick up sugar and, later, cotton. Tudor's idea was to sell the ice to wealthy colonists to put in their drinks. He even marketed his ice in England advertising that it came from the pure water of the Kennebec River in Maine and therefore was safer to put in a drink than any locally-harvested ice from some typhoid-ridden pond in Lancashire or Yorkshire. 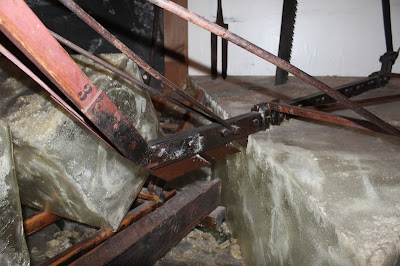 With ice now commercially available all year round refrigerators, known as "little ice houses" were invented in Boston in 1816. Long before the advent of electricity people could keep produce in their own homes for extended periods of time and enjoy out-of-season fruits and vegetables for the first time. There's no doubt that the ice trade changed people's diets around the world and extended our lifespans. Norway---also big in shipping and cold weather---because a major competitor for the world's hunger for ice.


A note for Australian readers: in 1864, after a few failed attempts, salmon eggs were transported in ice from Britain to Tasmania. This was the start of the Tasmanian salmon industry.

I'm writing this from South Bristol, Maine, where various member's of my family have had holiday cottages since 1910. There are two activities here: lobster fishing and summer tourism. Before the summer people began to arrive in the late 19th century this was an isolated community that relied on fishing. So it was that the Thompson family, 160 years ago, started sawing up their pond in winter, storing their ice in the Thompson Ice House for use by fishermen to bring in a fresh catch and for its shipment to Boston and New York.


In summer blocks of ice were delivered to summer cottages for their refrigerators. I remember these days before summer cottages had electricity and I remember Ice Thompson himself coming in through the kitchen door and dropping another ice block in our "ice box". (I don't think we called it a refrigerator because that word had been taken over by the electrical ones.) 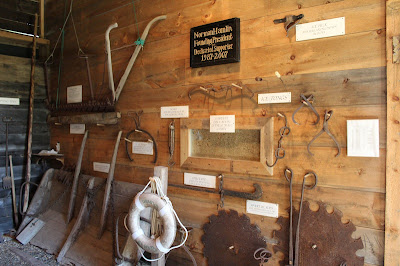 Ice---his real name was Herbert but everyone knew him as "Ice"---was the end of a line of ice-providing Thompson's and when the business finally went under his ice house fell into ruin. Happily, in recent years, money was raised, the ice house was restored and it is now the Thompson Ice House Museum. If you come to South Bristol on any year in February you, too, can join in with a small army of volunteers and cut ice from Thompson Pond to restock the ice house. It looks like cold and dangerous work to me but when I'm sweltering in the heat in Sydney I may just watch the video of the Thompson Pond Ice Harvest to help cool off.

There's also an excellent display about Maine's ice harvesting industry at the Maine State Museum in Augusta; worth every cent of the two dollar admission price. (Cheaper is you're young, old or part of a huge family.)

Yesterday, while walking in the woods, Jill and I came to a small cemetery and there were the graves of "Ice" and generations of Thompson icemen and women. It's tempting to say---but of course I won't---that if any family deserved to be cryogenically preserved, it's this family.

That's some interesting historical facts Duncan, thanks for sharing. I wonder if a double whisky on the rocks would taste any different with Maine ice in it instead of Sydney tab water ice from our fridge. Maybe you could bring some ice from the Ice House back to Sydney, though not sure if you'd get cleared at customs.

I was very little but there used to be an iceman who delivered to people who still owned iceboxes.

We had a fridge but there were people who still had an icebox.

He had a horse who knew where the stops were and didn't need to be tethered.