Poor Oscar Wilde. He wrote some very clever plays, stories, lots of poetry and one novel but died very poor tragically young. Among his writings was a short collection of fairy tales in which the main characters---as someone commented---lived "unhappily ever after". I guess that could have been said of Oscar as well. The best-known of these tales are The Happy Prince and, my favourite, The Selfish Giant. Resist it as I try, this one always leaves me dewy-eyed at the end.
Oscar Wilde is buried at Pere Lachaise Cemetery in Paris, apparently the most-visited cemetery in the world. Years ago when I was a university student in Paris I spent many pleasurable hours wandering the streets of this huge cemetery discovering the tombs of famous artists, statesmen, scientists, military leaders, nobility and just plain rich people. Because so many of the tombs are above ground it's like being in a city of the dead---creepy but beautiful and filled with wonderful sculpture. Another attraction back then is that it didn't cost anything to get in. Well, not if you were alive. And it's still free today.
Recently I was in Paris again and visited some of my old (excuse me) haunts in Pere Lachaise. One of those is Oscar's tomb. This great stone monument with an angel on it (I think it's an angel) is the work of the sculptor, Jacob Epstein. Sadly, since my first visits, the tomb has been loved to death. At first it was lipstick kisses and then other graffiti followed. Now it's covered in messages from admirers. Maybe Oscar would approve but I believe the City of Paris is about to clean it up and restore it to the original. I'm not sure how they intend to keep it from being graffitied again. 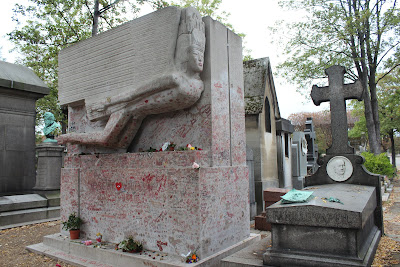 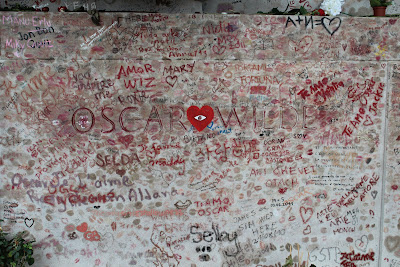 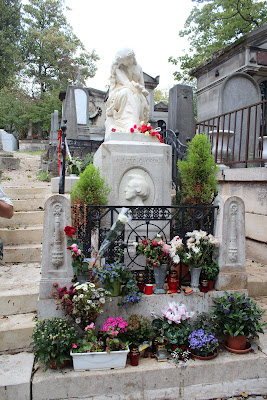 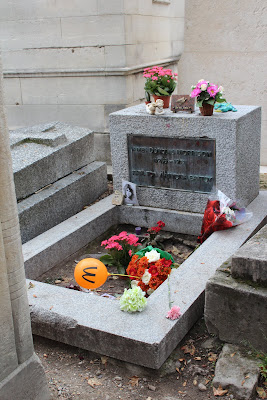 Even past rocker Jim Morrison is shown more respect from devotees of The Doors. 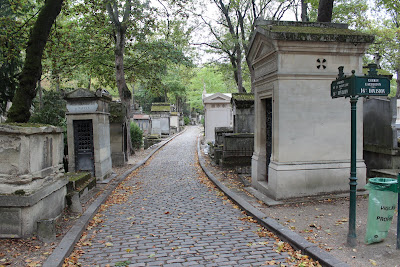 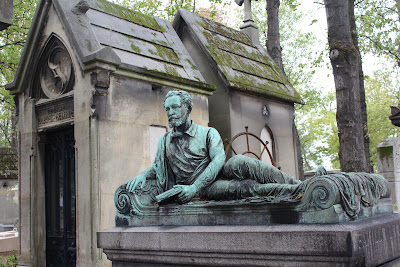 Who is this? Possibly a writer because he's holding a book. It shouldn't be long before he's joined by a writer holding an e-reader. 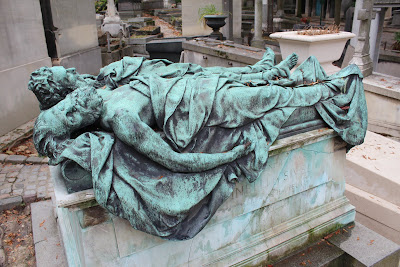 Sleeping on a bed that's too small for you can be fatal. 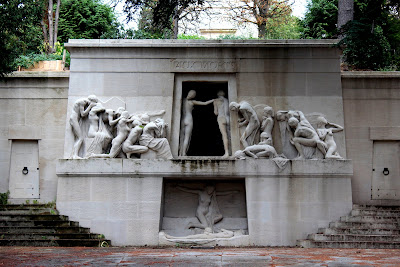 This monument "To Death" is one of the most haunting in the cemetery. Upstairs are a couple heading for the underworld and staring into the void ahead. Behind them are people soon to follow and none too happy about it. I'm not sure what's going on downstairs but the one lying on the ground doesn't look well.
So put Pere Lachaise on your list of places to visit if ever you're in Paris.
By the way, if you noticed a "Selby" graffito on Oscar's tomb, neither Selby nor his millions of fans around the world put it there---I did. Well, I didn't actually write it on Oscar Wilde's tomb but I couldn't resist adding it electronically to the photo. I guess this makes me a would-be graffitologisto.
Posted by Duncan Ball

Gosh, there's even more graffiti on Oscar's Tomb than when I was there.

Nice you picked Chopin's tomb to photograph, as I did too.