I finished writing the latest book in the Emily Eyefinger series, Emily Eyefinger and the Secret from the Sea, a couple of months ago. It is now being edited by an excellent editor at HarperCollins, Australia. (Many thanks, Anne.) My first drafts can be messy but after a lot of re-writing I send off what I think is a "clean" manuscript. It's always deflating to get it back with scribbles all over it and pages of notes showing me where I've gone wrong.

At times like these I think of Lord Timothy Dexter. (I wrote about him ages ago but you won't remember.) It's always heartening to be able to point to someone who is worse at something than you are or, in this case, than I am. Lord Timothy is my anti-role model. Or is he my role anti-model? Either way, he was a complete idiot.

In 1798 he wrote and self-published a book with no punctuation at all and CapiTal lettErs UseD At raNdom. Well maybe not quite that random. He couldn't punctuate, he couldn't spell, his grammar was atrocious and he didn't have an editor to hide the fact. Or would that be facts?

His book was called A Pickle for the Knowing Ones or Plain Truth in a Homespun Dress. It was a collection of his thoughts about everything. In it he declared himself, '...the first in the East, the first in the West, and the greatest philosopher in the Western World'. He was no shrinking violet. 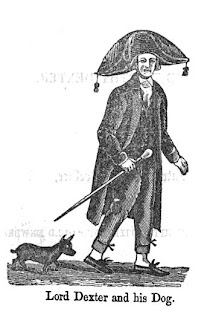 For those who complained about the lack of punctuation,  in the second edition of the book, he included a page at the back with nothing but punctuation: rows of commas, exclamation marks, questions marks etc. He told his readers to 'peper and solt it as the plese'. 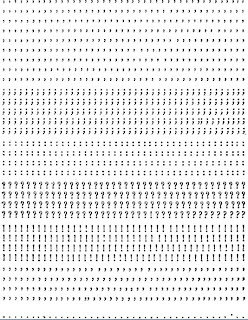 Lord Timothy wasn't a lord at all. He was American for starters and America doesn't have a House of Lords. He just called himself "Lord". He was a businessman with a lot of luck. He bought a huge amount of Continental Dollars after the American Revolution when they were worthless only to have the new Secretary of the Treasury reinstate them as the real currency. Suddenly this worthless paper was real money and he was very rich. He used it to do lots of strange things including having statues of famous people made for his front garden. Of course he included a sculpture of himself.

I have to declare an interest here: "Lord" Timothy was my father's mother's father's mother's father's mother's wife. Sadly I can't claim any of his DNA so can't use this as an excuse for the mistakes in my writing. My ancestor was Timothy's second wife and I'm descended not from him but from her marriage to her first husband, if that makes sense. One thing I will say for this highly eccentric man is that his book is in print after 214 years. There aren't many writers who could make that claim so he must have done something right. 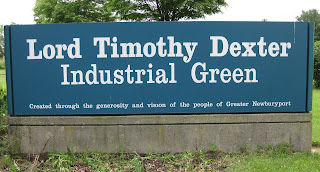 As a footnote to all this, a couple of years ago I was driving through Newburyport, Massachusetts, where Lord Timothy lived and I saw a number of references to him including the name of the local industrial park where he'd once owned land. But doing a quick search of the internet just now I find that they're about to rename their industrial hub. They're going to give it the much less memorable name of Newburyport Business Park. We can only hope the new sign says something like: