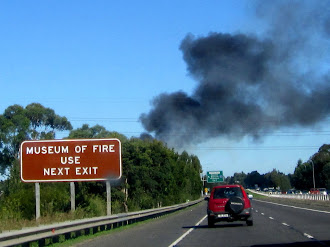 Glad to have been on hand, Duncan.

That photo helped my blog to a near record number of hits (narrowly beaten by the report of our hiking/photography exploits).

Hope lots of people visit your hungry blog too.

What a funny photo Duncan - fast thinking too! I'll do my best to launch it's journey into viral fame. Juliet

That's quite hilarious Duncan. I'm just wondering if you were driving very very slow on the M4 highway, or if you and Richard have trigger quick hands like John Wayne.

I guess another moral to this story is that it's of more use to have a real fire fighter station next door than a museum of fire fighting.

We were driving at a good clip, at about the speed limit so 100 or 110 kmph so it was a test to get the camera out of my pocket before we passed the sign.