In the story "Selby's Christmas Parrot" in the book Selby Santa (No. 15 in the Selby series), Selby discovers a male Christmas Parrot, one of the rarest birds in the world, in Bogusville Reserve. It is so rare that only one other is known to exist, a female in the National Zoo. The Christmas Parrot is red and green and has a silver crest on its head like the star on a Christmas tree. I won't ruin the story by telling you what happens but I wanted to say that if ever there was a candidate for a real Christmas Parrot the Australian King Parrot would do nicely (but for the lack of a silver crest). 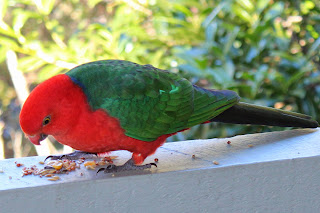 King Parrots aren't rare here on the east coast of Australia and a few of them visited us recently in a house where we were staying in the Blue Mountains west of Sydney.

Still on the subject of Australian parrots, our local florist has a pair of Rainbow Lorikeets that range freely around his shop. The other day I photographed Rocky who was nibbling his way though all the herbs unable to settle on the one he liked best. Or maybe he just liked them all. 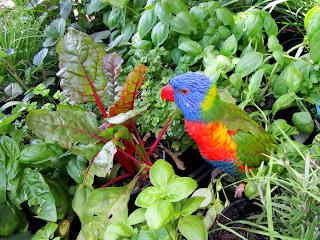 Merry Christmas and Season's Greetings to all.
Posted by Duncan Ball